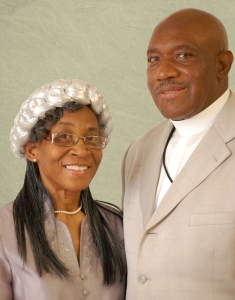 Superintendent Evans Brown, Sr. was born in Macon, Georgia to the late Mr. and Mrs. William H. Brown, Sr. At the age of 19, he was filled with the Holy Ghost and then called into ministry. After graduating from Peter G. Appling High School, he served in the United States Army for two years and the Georgia National Guard for eleven years.

Superintendent Brown has graduated from Turner Theological Seminary. He has been in ministry for over 45 years, in which time he and our First Lady founded True Faith Church Of God In Christ. He has led the True Faith Church Of God In Christ congregation for over 28 years. He is known as the “911 Preacher” because of his willingness and ever-readiness to pray for people, counseling, mentoring and laboring in the vineyard at all hours of the day and night, within a minute’s notice. He has been a blessing and a beacon to the Fort Hill, Cross Keys and Greater Macon communities. The Lord blessed him with being able to accomplish the following:

God has given Superintendent Brown a vision and he is marching forward in bringing the property once known as the Cross Keys Christian Academy into the “Land of Promise, the Miracle On Jeffersonville Road.” A faithful and tireless man has been sent to bless the City of Macon and vicinity!